One of the great things about IndieCade is that you not only get to demo digital games but tactile ones as well. Antimatter Matters was one of the board game nominees at the festival and it initially caught my eye because of how beautiful the board is.

So, what is Antimatter Matters? It’s a quantum physics board game! You’re a lead scientist who needs to build an atom from individually captured elementary particles (up quarks, down quarks, electrons, and the gluons and photons that bind them together). It’s a 2-6 player game which offers solo or cooperative play as well as challenge modes. The first person or team to artificially construct an atom wins.

You don’t need to know anything about quantum physics to play except that you need to collect a number of parts to make an atom. The parts are all color-coded (as well as color-blind friendly) and each player is given a small card that lets you know what options are available during your turn and what parts you’ll need. 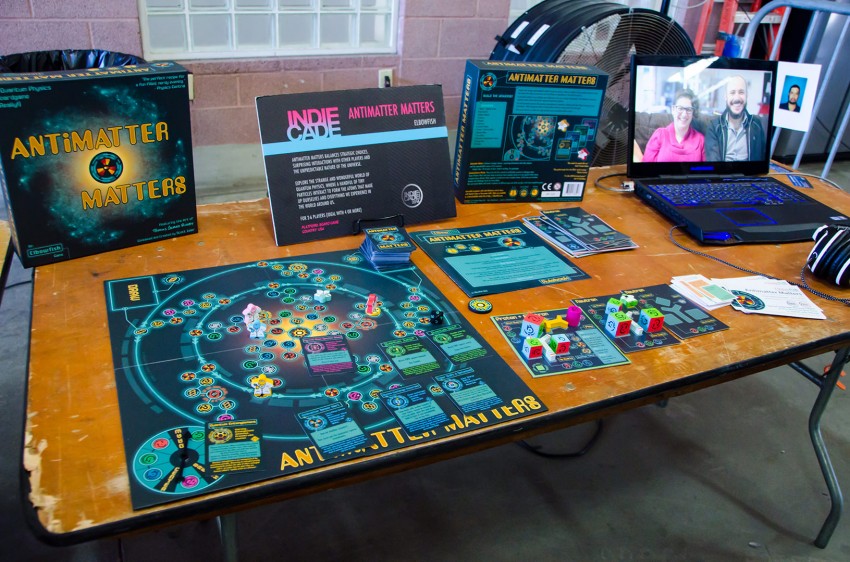 You roll the die, move that many spaces, and collect whichever particle you land on. It sounds pretty easy, right? Well, not really. Just like true physics certain things can and can’t happen. Things like quantum entanglement (you and another scientist are linked until the entanglement is broken), you can only move away or towards the sun, and sabotage by other scientists.

It’s a game of chance and strategy and it’s a lot of fun. The board itself is beautifully designed and the creators, ElbowFish, teamed up with PandaGM. manufacturers of award-winning games such as Pandemic, to produce the game. The board and the cards are of high quality and the pieces have a nice tactile feel and weight to them. 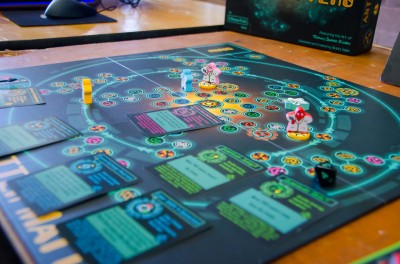 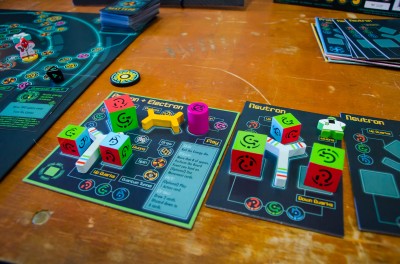 My partner and I sat down for a game with two random players but we couldn’t finish the game. Part of it was because of time constraints and the other was partly because we were sabotaging each other to get ahead. It was a lot of fun with strangers and I can only imagine how much fun it will be with some of my friendly board game geeks. This was one of the two games we bought after playing at IndieCade. It’s a game that was successfully Kickstarted and is now available to purchase.

I feel like this would be a great gateway game to get non-board game players interested as well as a great game to play overall. I haven’t been able to try co-op play or the different challenge modes but as soon as my copy gets it I’ll give it a whirl.